This year is coming to a swift close, but our work is far from over. As the 118th Congress comes together, our dedicated team at Ferox Strategies is ready to leverage our deep bipartisan connections to deliver clarity, agility, and impact.

The expected red wave to come in the 2022 Midterms was thwarted by a surprisingly strong performance by Democrats in key races. Below, we included the key takeaways, along with valuable insights you might have missed on election night.

Turnout in 2022 was lower than in 2018, but still ranks the second highest in a half-century, with more than 116 million people having voted this year.

47% of Michigan voters cite abortion as the primary issue driving their vote. Inflation trails behind at 28%. 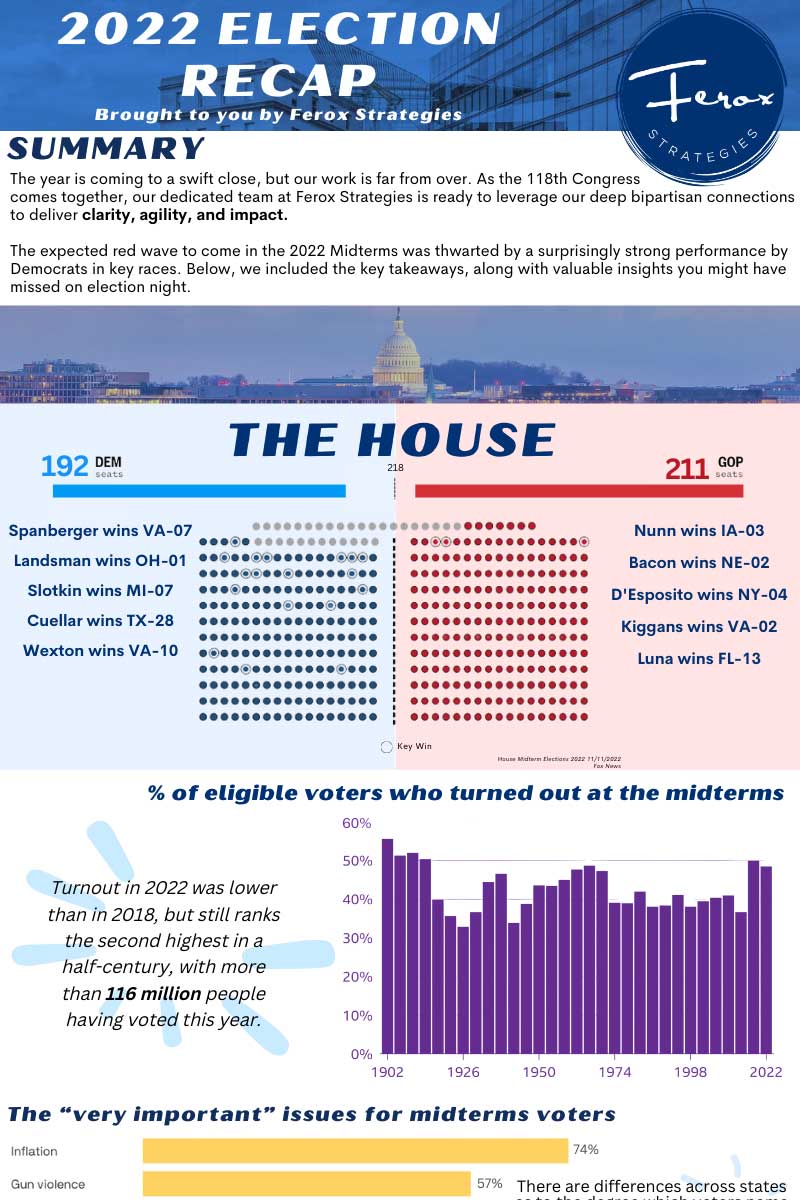 The fate of the Senate hands in the balance. Either party could seize control by winning too-close-to-call races in Nevada & Arizona, where officials are tallying thousands of uncounted ballots.

The GOP is likely to take control of the House and elevate Rep. Kevin McCarthy (R-CA) to Speaker. This power shift is expected to destabilize President Biden’s agenda via a host of new investigations into China, Hunter Biden and the Department of Justice, along with legislation aimed at tackling border security and inflation.

GOP Senators will meet November 16th to elect the leader of the conference and deputies. Senator Mitch McConnell (R-KY) is poised to win another stint as the highest-ranking Republican. This would make him the longest serving Senate party leader in American history.

To reduce inflation, Republicans have expressed plans to cut government spending, solidify GOP-backed tax cuts that are set to expire over the next three years and cater to corporations by rolling back Biden-approved corporate tax increases and reducing funding for the Internal Revenue Service to investigate corporate tax crimes.

House Democrats will hold their leadership elections November 30. While Speaker Nancy Pelosi (D-CA) vowed to her caucus that this would be her last term as party leader, Rep. Steny Hoyer (D-MD) and Rep. Jim Clyburn (D-SC) have been clear they made no such promise.

The leading candidate is Rep. Hakeem Jeffries (D-NY) now the caucus chair, fifth-ranking in the hierarchy. He would be the first Black leader of either party in either chamber.

A potential challenger to Jefferies is Rep. Katherine Clark (D-MA), a close ally of Speaker Pelosi. It’s an open secret that Pelosi has been grooming Clark for a top leadership position. Clark is currently the Assistant Speaker, which makes Clark the fourth-ranking member in the House Democratic leadership, just ahead of Jefferies.

Democrats staved off an anticipated “red tsunami” of Republican gains in midterm elections. While we still await results of key races, the GOP is likely to take control of the House. This will usher in a new leadership team, and most likely a host of investigations meant to hamstring the Biden agenda.

The fate of the Senate is far less certain. Party control can be determined by the results of the Arizona and Nevada races. However, a split in the Senate would mean the majority would come down to a runoff election in Georgia for the second time in two years. Ferox Strategies delivers decades of expertise in government affairs and deep bipartisan connections. Through engagement projects like these, the Ferox Team is proud to keep you updated on Congressional news.